Menu
Black Spiky Caterpillars: Should You Be Worried? 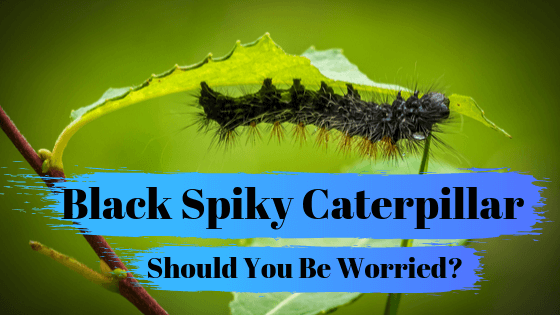 Black Spiky Caterpillars: Should You Be Worried?

When you see Black Spiky Caterpillars, the first thing that comes to your mind is obviously to be worried and to see if you are in any real danger. Most people believe that Black Spiky Caterpillars are very poisonous, so that on its own can be extremely problematic. Here you get to learn more about these creatures and you can see if they are dangerous or not.

What is the Black Spiky Caterpillar?

The Black Spiky Caterpillars are known as the eyed tiger moth caterpillars. They have a lot of black spikes all over the body and that’s why they come with such a fuzzy look to begin with. The orange and red bands are spread all over the fuzz and the Black Spiky Caterpillar will automatically roll into a ball when scared to make the red bands prominent. That doesn’t mean it’s dangerous in any way, it just tries to show a sense of danger to the enemy so it can be left alone.

Sometime they might even leave some yellow liquid on your hand if you try to pick it up. This is actually a defense mechanism. It’s not toxic for your hand, but you should not ingest it either. And of course, you should always wash your hands after encountering such a creature to be safe. A thing to note is that not all of the Black Spiky Caterpillars are actually fuzzy and big. They are actually traversing multiple molting stages before they will reach this level. Some of the younger Black Spiky Caterpillars are actually black or brown and they have very few bands too.

Most of them will turn into moths, with the giant leopard moth standing out as its wings are almost made out of porcelain, that’s how visually impressive these really are, and you should totally keep those in mind if possible.

Should you be worried about any poison?

What we noticed with the Black Spiky Caterpillars is that they are not poisonous, at least not all of them are. The hickory horned devil and the tomato hornworm are not poisonous, which is something to keep in mind all the time. That being said, the bristles are bringing in a burning sensation for the saddle back caterpillar. This one is bright green in coloring and it also has a soft brown fur that you need to think about all the time. The bristles will usually bring in a burning sensation and it will offer lots of swelling. It’s not lethal, but dealing with this will certainly hurt a lot, and that’s definitely something that you need to keep in mind all the time.

There are some other poisonous caterpillars like the monarch, stinging rose, cinnabar moth and the bag caterpillars. All of these are important to keep in mind and you should know how they look so you can avoid them. Ideally it’s a good thing to stay away from caterpillars. This is not a complete list, and you can’t always know which one of the caterpillars are safe and which ones are dangerous. Most of the time the best rule of thumb is to stay away from creatures like these that you don’t know very well. Otherwise there can be issues and you have to avoid all of that.

Is it ok to bring Black Spiky Caterpillars to your yard?

They are varying the ecosystem and they are also pollinating flowers and promote seed production. So even if they can be poisonous at times, caterpillars are a part of the ecosystem and you need to take good care of them if you can. That doesn’t mean they will all be dangerous to deal with, but if you tackle them correctly and in a proper manner you can get some really good results. Just avoid any rush with this and focus on bringing in caterpillars slowly to the yard.

It’s ok to have Black Spiky Caterpillars in your garden and it’s safe to encounter them in the wild. But you shouldn’t try to touch them at all. These caterpillars have their own defensive system and you don’t really know if the one you are dealing with right now is poisonous or not. Which is why the best thing that you can do is to stay away from problems and just admire the caterpillar from afar. They are very important for the ecosystem and it’s a very good idea to keep them safe. Let them live if you see Black Spiky Caterpillars in your garden, as they are helping your garden thrive!

Have other pest you are not sure should be in your garden or living on your plants?  Call the experts at FullScope Pest Control and let our knowledgeable technician help you identify and treat for those damaging plants.  Call or text 832.898.0190