Menu
What Are the Different Types of Ants in Texas? 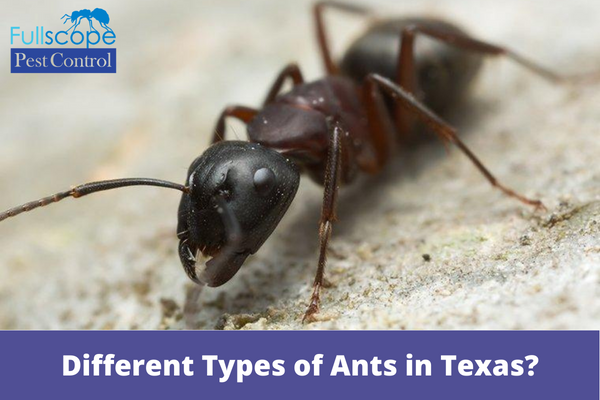 The type of ant invading your home might affect the severity of an infestation. Innocent ants exist. Other forms cause structural harm. This information can help you understand the different varieties of ants in Texas, but contacting a professional exterminator is the best approach to identify them.

The red fire ant is one of the species found in the most significant numbers in east Texas and throughout the southeast United States. Workers of fire ants range in size from 1/16 to 3/16 inches and have a reddish-brown coloring. Fire ants have a double pedicel and can be recognized by their appearance. In addition, fire ants are known to construct recognizable mounds with no obvious entrance holes on the ridge itself. One of the most typical characteristics of the fire ant is its hostile reaction to the disturbance of its nest, which includes delivering a powerful and excruciating sting. 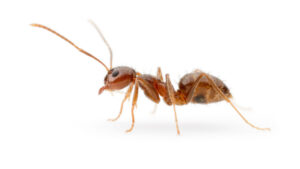 The frantic and unpredictable manner in which crazy ants run has earned them their name. In addition, they can be differentiated from other species of ants, such as the Argentine ant, by the large number of hairs covering their body, including four pairs of strands located on the top of their thorax. The natural crazy ant is a species of crazy ant that can be found frequently throughout East and South Texas. This ant is dark brown, has long legs and antennae, and moves quickly. Buildings are a typical target for its infestation, particularly in the state’s warmer and more humid regions. 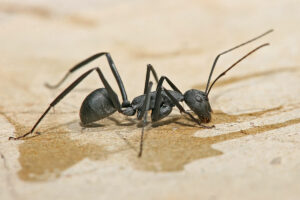 The length of a carpenter ant’s body ranges from one-quarter to one-half of an inch, and its color can vary from solid black to brown to a blend of black and red-orange. The workers can be any size, have a single pedicel, and have a smooth and curved thorax when viewed in profile. Carpenter ants are primarily nocturnal and only emerge from their nests at night to forage along paths that run along fences, tree limbs, water hoses, and other linear items. They can be found not just in the hollow trunks and branches of trees but also in hollowed doorways and boxes, as well as the ceilings and walls of buildings. 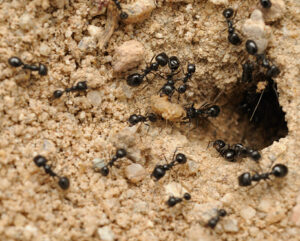 In the summer, swarms of these dark brown to jet-black crawlers are abundant, and they can typically be found in regions with a dense canopy of trees. The little black ants conceal themselves in dark places such as behind walls, under rocks, beneath piles of logs, and other similar areas. They have stingers; however, because their bodies are so small and frail, you probably wouldn’t even feel the prick if they pricked you. 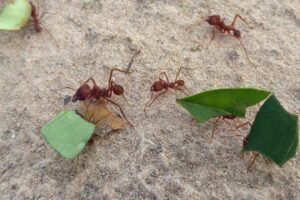 Leaf-cutting ants reside in two-million-strong nests. They were named because they tended to cut leaves and other plant parts. These ants destroy weeds, grasses, plum and peach trees, blackberry bushes, and numerous cereal and forage crops in Texas. Ants don’t eat leaf pieces; they use them to grow a fungal garden in their underground nest. As the fungus grows, the ants feed its larvae. They solely eat this fungus.

These are some types of ants you’ll find in Texas. The best way to prevent an ant infestation is to keep your home clean, dry, and well-ventilated. If you notice ants in your home, contact Fullscope Pest Control! We are knowledgeable and experienced in treating ants and can help you get rid of them quickly.