Menu
What Do Exterminators Use To Kill Roaches 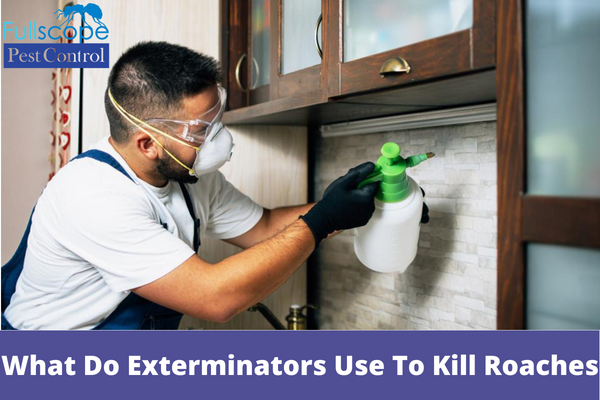 Roaches have a high level of pesticide tolerance, making them particularly challenging to eradicate. The likelihood that you won’t be able to eliminate them if you try to do it yourself is great, so they’ll reappear within a brief period.

If you employ a reputable pest control business, they’ll be sure to use various techniques to carry out a comprehensive elimination. Exterminators often spray roach-killing chemicals, install bait stations, and conduct periodic inspections until the roaches are entirely eradicated.

Below are the different methods used by exterminators to remove cockroach infestations.

Tent fumigation is frequently utilized as a last option when roach infestations become intolerable. Due to their strength and ability to penetrate all surfaces, including cracks and crevices, the chemicals employed in fumigation are effective against cockroaches and their eggs.

Although it can harm people and animals, fumigation is frequently employed as a last resort to combat severe cockroach infestations. You should give yourself a minimum of one to seven days after fumigation before reentering the house.

Cockroaches can be successfully eradicated using gel baits. This is why pest control professionals frequently employ them. These gels are supplied in a convenient syringe and utilize several pesticides. Small quantities of the gel may be applied with this syringe any place roaches hide throughout your houses, such as in cracks and crevices. The cockroaches will consume the gel bait and quickly perish.

Exterminators use Pyrethrin and pyrethroids. They are active chemicals used by licensed pest exterminators for cockroach treatments. This chemical insecticide paralyzes and kills roaches. Chrysanthemum flowers produce pest-repelling Pyrethrin and pyrethroids. Most insecticides include these compounds. They’re harmless, so spraying them on your property won’t hurt anyone.

It does not cause asthma or allergies. However, Pyrethrin and pyrethroids are dangerous for pets like fish in the water.

Exterminators also employ piperonyl butoxide. It is a well-known pesticide compound. Piperonyl butoxide works better with Pyrethrin and other compounds. High exposure to the chemical may damage people and animals. Exterminators take safety steps in your house to avoid harming you.

Liquid or powder fipronil is a common roach pesticide. It kills or repels bugs by disrupting their nervous systems. Pest control professionals should only use fipronil, a minimally hazardous spray. They must notify you and your family of impacted regions while using it.

Boric acid is a famous roach killer. As dust, it is spread over the house and puffed into cockroach hiding places. Roaches crawl over these surfaces and get powdered. They’ll eat it while preening. As long as it stays dry, boric acid kills roaches indefinitely.

Indoxacarb kills cockroaches. It is used in gel baits and by pest control experts to kill roaches. It also poisons living roaches when they touch poisoned bug dung and corpses, just like baits. Thus, this pesticide kills three generations of cockroaches.

Reach Out to Our Exterminators Now!

If roaches are becoming a problem at home, call Fullscope Pest Control for effective and fast services. We promise to keep you and your family secure while working on your home.